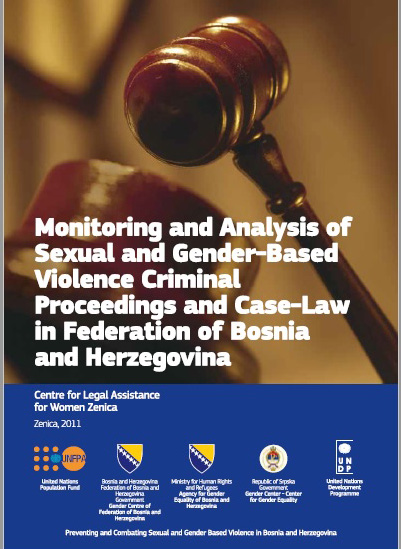 Center of Legal Assistance for Women, in support of UNDP and UNFPA, conducted an analysis of criminal proceedings and judicial practices in the area of sexual and gender-based violence in the Federation of Bosnia and Herzegovina, through the monitoring of the trial of 145 cases. In 69 (out of 78) cases of Criminal act Domestic Violence the violence was committed against family members with whom the perpetrator lives in a common household (wife and children). In 71% of cases a suspended sentence was imposed. No case has been noted in which a protective measure was pronounced. In 9 out of 14 cases (or over 64%) of the murders that were monitored, the victims were wives. In 3 out of 9 cases (33.33%) of the wife’s murder, the accused was previously convicted of Criminal act Domestic Violence and Violent Behavior committed against the woman. You can read the full Trial Monitoring_Analytical_report_2011.

Strong together, for the future!